Christmas ads are fast becoming a staple of the festive build up, with the public waiting in anticipation for their launch to firmly mark the start of the festive season.

The popularity of Christmas adverts has become almost unavoidable with everyone keen to give their opinion of the best/worst ad of the year – or remind us of a classic that won’t be beaten!

This year, some of the RH team have been drafted in to give us their review of the Christmas ads submitted by the big names, introducing Geoff, RH Creative Director, Client Director, Mitch, Dawn our Studio Manager and Digital Executive Eleanor.

Mitch: Underwhelmed by John Lewis this year, felt like it was geared around selling monster merchandise rather than the take away message. Elbow definitely the best element.  6/10

Dawn: Great, different theme that held my attention from start to finish – message, know your child’s wishes at Xmas ;-) 8/10

Eleanor: Not sure I am fully on board with the storyline this year. Quite disappointing and I was no where near crying – I expect more John Lewis! 5/10

Next up we’ve got Sainsbury’s, who has achieved the most viewed Christmas advert to date with Mog’s Christmas Calamity in 2015 – racking up over 37 million Views!

Dawn: What the flipperty giblets was that? Too fast to follow and looks amateurish. 3/10 for Ricky Tomlinson’s contribution.

Eleanor: It’s bearable if you listen to it without the sound… 5/10

This year, Debenhams gave us a modern day love story…

Geoff: Cinderella reimagined by Richard Curtis. Nice trailer for a feature film but what’s it got to do with Debenhams? 6/10

Mitch: Nicely produced love story but could be an ad for anytime of the year, not massively festive. What’s McGregor doing in there??! Doesn’t add anything and surely doesn’t need the cash!  6.5/10

Dawn: Pure cheese, I literally felt a bit sick when they kissed! 5/10

Eleanor: I really like this – but it may be just Ewan McGregor’s narration that has hooked me in! 8/10

Geoff: Paddington does sterling work in promoting the idea of Christmas as a time for good will to all men – even burglars! 7

Mitch: I get angry with lazy advertising, like Halifax crowbarring in classic cartoon characters (scooby doo etc) for the nostalgia effect. Come up with your own ideas! M&S have seemingly done the same and are piggy backing on Paddington’s popularity and not being original.  4/10

Dawn: Marmalade is an all too forgotten treat – sweet ad, nicely done, no expense spared, again entertained me from beginning to end. 9/10

Eleanor: This is cute – love the storyline and use of Paddington Bear in this one! 8/10

Tesco heads down the ‘Everyone’s Welcome’ route for 2017

Geoff: Tesco offers up a slice of inclusiveness that showcases their turkey offering. Tasty. 7

Mitch: Sometimes just keeping things simple works best. The Turkey, the centre piece for Christmas table – and real people doing what we all do – argue, eat and be happy!  8.5/10

Dawn: Much more realistic – but why would we want a preview of the horrors of Xmas day – I prefer a bit of fantasy, especially around Christmas :) 4/10

Eleanor: Bit more of a realistic representation of Christmas Day making it relatable! 7/10

Finally, we come to Asda

Mitch: What’s going on here?! its fine but I’m not taking anything from it! Fleetwood Mac the best bit.  5/10

Dawn: Charlie and the Chocolate Factory revamped into a Christmas ad! 6/10

So there we have it, the great RH Christmas ad review is over.

The winner? It’s a mixed bag but Aldi and Kevin the Carrot could have just edged it!

Come back in 2018 for the next installment!

To cap off a year of successes and significant growth, RH has been placed within The Drum’s coveted Top 100 Independent Agency list for 2017! 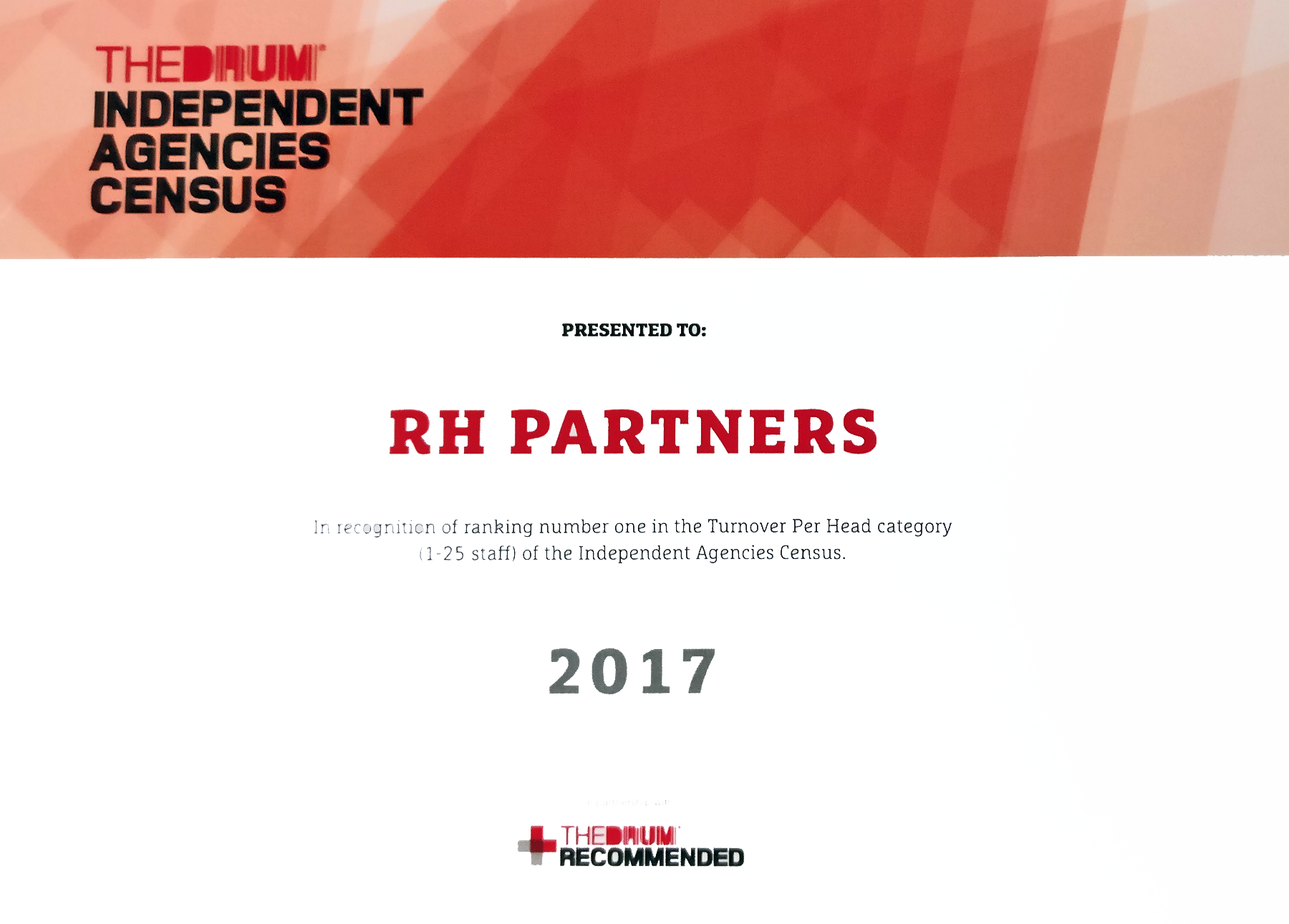 As well as making it into the 2017 Top 100, RH also secured the top spot nationally the Turnover Per Head category amongst SMEs (1-25 staff). The award follows a string of good news for RH, including three RAR Digital nominations earlier this year and achieving Google Premier Partner status in the last 12 months.

The Top 100 is the cherry on the cake for RH in 2017, which has seen the agency consolidate its specialism in the Education and Local Government sector adding some major new client wins including the University of Huddersfield, the University of Plymouth International School, University Centre Somerset and Hampshire County Council.

“It’s been a particularly impressive year for RH”, said Paul Ridgers, Managing Director, “we’ve got a highly talented team whose creativity, innovation and sheer hard work has been rewarded with some significant client wins as well as expansion of our existing client activity”.

“Our digital activity has increased exponentially and we have also seen growth in traditional media as well. In the age of digital and media-only agencies, RH are becoming almost unique as a truly through the line full service communications agency. It’s fantastic for our expertise to be rewarded by the Drum’s prestigious Top 100 recognition”.

New clients and a continual drive to innovate across digital channels has meant that the RH team has expanded in 2017.

“The South West is increasingly recognised as one of the best places in the UK in terms of digital innovation so it’s brilliant to be able to attract more talent to the area to work on exciting national and international projects,” said Tom Ritchie, Head of Digital.

“It’s been a particularly busy and exciting time in our 40-year history!”

With turnover planned to exceed £6m this financial year and impressive pitch win percentage, the future is looking bright for an agency established in Exeter way back in 1976.

From Instagram Stories to Boomerang and Instagram Live Video, the platform has rolled out more than 20 new features within the last year encouraging more users to engage and produce photo and video content.

And it seems that these new features are pulling in the crowds.

Back in March, the platform announced that there were one million active monthly advertisers up from 200,000 the previous year. What’s more, it seems that users are receptive to this advertising with over 120 million Instagrammers reported to have visited a website, received directions, called, emailed or direct-messaged to learn more about a business.

Instagram Stories has grown from strength to strength, with well over 200 million users now using the feature on a daily basis.

With the addition of richer content and more chances to engage, it is not surprising that users are now spending more time on Instagram too. Those under 25 spend more than 32 minutes a day on Instagram, on average, whilst those 25 and older are spending more than 24 minutes of their day on the platform.

As users turn to richer content we can expect to see the platform grow further, so what better a way to reach your target audience than introducing some Instagram advertising into your digital strategy. Get in touch today and find out how we can help you.

RH Partners are proud to announce that we have been recognised by the Drum’s Recommended Agency Register and secured RAR accreditation for the year ahead.

This award adds yet another accolade to RH’s portfolio and reflects our status as one of the leading South West full service creative and media agencies.

“RAR status, alongside obtaining Google Premier Partner status last year, is testament to the strength of our digital media offering and the dynamism of the team who have achieved 25% year on year growth since 2013.

Overall, it has been a good start to 2017 for RH, thanks to a series of national client wins and an expanding team, all of which confirm our status as one of the UK’s leading independent, full service agencies.”
Paul Ridgers, RH Managing Director

Many thanks to all our clients who rated our Digital, Media, and Creative services so highly and gave us such positive feedback! We will continue to do our upmost to justify your opinion of us.

Scroll to top
We use cookies on our website to give you the most relevant experience by remembering your preferences and repeat visits. By clicking “Accept All”, you consent to the use of ALL the cookies. However, you may visit "Cookie Settings" to provide a controlled consent.
Cookie SettingsAccept All
Manage consent